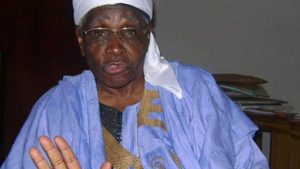 Speaking at the Northern people’s summit in Kaduna on Wednesday, Abdullahi said rehabilitating repented bandits would go a long way in curbing attacks in the North.

He noted that the government should grant amnesty to repented bandits just like it did for those Niger Delta militants who repented and were trained.

Abdullahi, however, asked the government to only go after bandits who do not want to desist from crime and want to continue attacking lives and properties.

The NEF chairman added that those who attack and kill northerners must be stopped and be prosecuted.

He called on federal and northern state governments to design and implement plans for the domestication of herders, and also promote policies to improve the quality of life of Fulani herder communities.

The NEF chairman said banditry, insurgency, cultism, piracy and irredentism are threats to the nation, and they must be treated with a mindset that appreciates their roots, complexities and solutions in a national context.

“Those who attack and kill northerners must be stopped and be prosecuted.

“The entire phenomenon of armed criminality requires bold steps and policies to deal with it, and we should examine these and make our recommendations to those with responsibility to implement them.

“Even at this stage, however, I have to say that dealing with criminality, poverty, and destitution in the north will require a national effort to mitigate.

“The nation needs to prepare to consider massive investment in human capital development, infrastructure, and basic security if it will reverse the rising tide of frustrations, destitution and criminality which afflicts most of the north.

“Those who see this as an unnecessary concession to the region need to be reminded that this was precisely the approach that substantially resolved the Niger Delta militancy.

“The north needs not make this demand in hushed tones, or apologise for them.”

Why Bandits Are Targeting Kaduna – El-Rufai