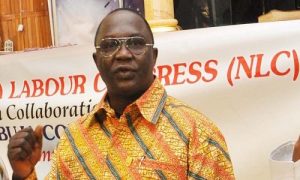 The Nigerian Labour Congress (NLC) has declared that relocating the United States African Command (AFRICOM) from Stuggart Germany to Africa is not in the best interest of the continent and Nigeria.

The NLC president, Ayuba Wabba argued that it will be counter-productive to bring foreign soldiers on local soil to fight insurgency.

The labour leader who rejected the physical presence of foreign soldiers on Nigerian soil, however, welcomed the idea of exchanging intelligence information between the countries so as to overcome insecurity.

Wabba spoke against the backdrop of a recent appeal by President Muhammadu Buhari during a virtual meeting with the U. S Secretary of State, Anthony Blinken for the American government to consider moving AFRICOM from Germany to Africa.

But speaking on Thursday in Abuja at the 2nd national security summit organised by the NLC, Wabba rejected the idea of bringing AFRICOM to Nigeria.

He rather called on the federal government to provide all the necessary support for the Nigerian Military to combat the various forms of insecurity.

In his words, “However, we are concerned about recent plans to relocate the U.S. African Command from Germany to Nigeria. While we welcome intelligence sharing and ammunitions to support our armed forces, we warn that it will be counter-productive to replace our army with foreign soldiers.

“Nigerian Armed Forces are capable of surmounting the insecurity challenge if they are supported with adequate funds and technological equipment.”

The NLC leader also blamed the high rate of unemployment as well as the decision by some political leaders to sack workers as responsible for the increased rate of insecurity.

“Our political leaders should be ready to take responsibility for the actions they took while in office. There is a nexus between throwing workers out of their jobs and the resultant increase in unemployment and rising wave of insecurity.

“The present high state of insecurity in Kaduna State has a lot to do with the perchance by the state government for throwing workers out of jobs. As we speak, from 2016 to date, over 29,000 workers have been thrown out of their jobs in Kaduna State,“ he said.

“We call on the governor of Kaduna state to rescind the decision urgently. As we are aware, we have already slated five days of withdrawal of services in Kaduna State. All services, in all sectors, including, banks, railway, air transport and Civil Service will be withdrawn completely, in the first instance and where he does not show remorse and does not to be called to order, Nigerian workers will follow up to withdraw their services nationwide.”

Meanwhile, a human rights lawyer and Senior Advocate of Nigeria (SAN), Femi Falana has urged the Muhammadu Buhari government not to rely on any false hope of getting help from the US government in fighting insecurity in Nigeria.

He noted that historically, the US government and other western leaders have not done much to support the country’s war against insurgency.

Rather than expect help from the US, Falana urged the federal government to recruit more soldiers and police, empower and motivate them to do the job.