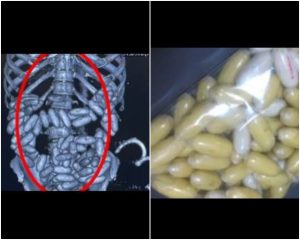 A video depicting the moment police arrested a Nigerian traveller who swallowed many wraps of drugs at an Istanbul airport has surfaced on the internet.

In the video, the Nigerian traveler named B.E.O was said to have come from an Ethiopian flight.  According to istanbul.sonakika, the suspect had swallowed over 844 grams of drugs and was captured by cameras after he arrived at the airport

The post reads; ‘‘At Istanbul Airport, 844 grams of drugs were seized from the stomach of a person named BEO with Nigerian nationality. The suspect who came to Istanbul on the Ethiopian Istanbul flight was taken into custody as a result of the pursuit of police teams by security cameras. The suspect’s arrival at the airport and the moment of his arrest was captured by cameras.”

The duo were arrested for allegedly selling illicit drugs in Akure, Ondo state. Drugs recovered from them include skuchies, cocaine, methamphetamine, heroin, cannabis sativa and tramadol.

According to a statement on Wednesday by the NDLEA spokesperson, Femi Babafemi, over 149kg of illicit drugs were recovered after an intelligence-based raid by NDLEA operatives at their location on May 2.

80-Year-Old Woman, Teenager Arrested By NDLEA With Over 149kg Of Drugs

Watch The Emotional Moment Fuji Star, Pasuma Broke Down In Tears Of Joy At Daughter’s Wedding