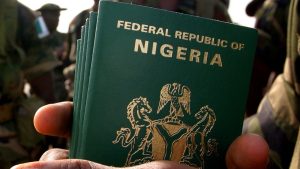 A letter addressed to the United States Ambassador, British and Canada Higher Commissioners in Nigeria, requested a visa ban on 34 Nigeria state governors, including their family members.

Naija News understands that the request was contained in the communique issued on Tuesday by a civil society organisation, the Civil Rights Realisation and Advancement Network.

The organization accused the governors of refusing to observe the constitutional provision on the funding of the judiciary, hence demand that the US, UK and the Canadian government ban them, their relatives including Attorney-Generals.

According to CRRAN, the continued lockdown of courts as a result of the governors’ refusal to observe the financial autonomy of the judiciary had constituted a grave assault on the Nigerian Constitution.

The letter titled ‘Appeal for your intervention and urgent need to impose a visa ban on the 34 state governors, their families and the 34 Attorney-Generals of the respective states of Nigeria’, dated May 4, 2021, was signed by Olu Omotayo and Dr. Danjuma Gambo, President and member, National Advisory Council for the group, Naija News understands.

The Judiciary Staff Union of Nigeria had on April 6 embarked on a nationwide strike to protest against the non-implementation of financial autonomy of the Judiciary by 36 state governors. CRRAN, however, in the letter, enjoined the US, UK and Canada governments not to see the strike as a mere strike of court officials/workers in Nigeria, but look at it from the point of the insistence by respective state governors except the Lagos and Rivers, that Judiciary, the third arm of government should never be independent.

The letter reads in part: “The clear provision of Section 81 and Section 121, of the Constitution of the Federal Republic of Nigeria, 1999, (as amended) provides the model for the funding of INEC, the Legislature and the Judiciary.

“How do you guarantee independence and impartiality of a judiciary when the chief judges are always on their knees begging the governors for fund in order to maintain a supposed sacred institution?

In another news, the Director-General of the World Trade Organization (WTO), Ngozi Okonjo-Iweala appointed four deputies to assist her in running the affairs of the organization.

Okonjo-Iweala, a former Minister of Finance in Nigeria appointed two women and two men as her deputies on Tuesday, Naja News reports.