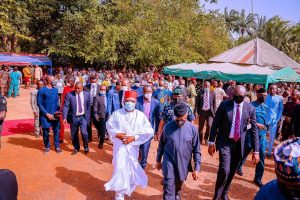 Governor David Umahi of Ebonyi State has accused Fulani Herdsmen of carrying out recent attacks and killings in the state.

He revealed that he knows the sponsors of the herdsmen, vowing to expose them to the authorities.

Speaking on Sunday during a visit by Vice-President Yemi Osinbajo to the state, the governor said the herdsmen “deserted” the affected communities before the attacks started.

He warned that the federal government may be unable to hold back the youths of the state if there is a repeat of the attacks.

Umahi said there would have been reprisals if not for the swift intervention of the state government.

“Your excellency, we are touched and we are encouraged by this visit, I’m told the murderers left a telephone which contains their contacts, their call logs and pictures,” the governor said.

“Your excellency, these things are enough to get these people apprehended, very shocking is that at the point of the attack, all the herdsmen living in Ishielu local government all deserted.

“This means that they were part of the attack on our people despite the governors of the south-east being called names because we are committed to giving them protection.

“It is very important we do anything possible to forestall further attacks not only in Ebonyi state but in the entire south-east.”

Umahi To Herdsmen: Stay Away From Ebonyi Until…