Tyson Fury has posted a screenshot of the Ring Magazine’s top three heavyweight rankings with a message for Anthony Joshua and Deontay Wilder.

Late on Wednesday night, the WBC heavyweight champion sent a cryptic tweet appearing to hint time could be running out to agree a site deal for the Anthony Joshua fight.

It’s known that contracts are signed for the undisputed fight between the two Brits, but the site deal must be confirmed to fully finalise it.

Shortly after his cryptic message, Fury put up a second post.

This one was a snapshot of the top three heavyweights in the world, according to the Ring Magazine rankings.

Number one in the rankings behind him is Anthony Joshua and number two is Deontay Wilder.

Dillian Whyte follows and Andy Ruiz Jr comes later down the list, but Fury opted to exclude these two – only focussing on the top three with himself in pole position.

He captioned this post with the simple words: “I’m the boss.”

It’s unclear quite what this all means for the status of AJ vs Fury at present, with some worried a site deal will not be finalised. 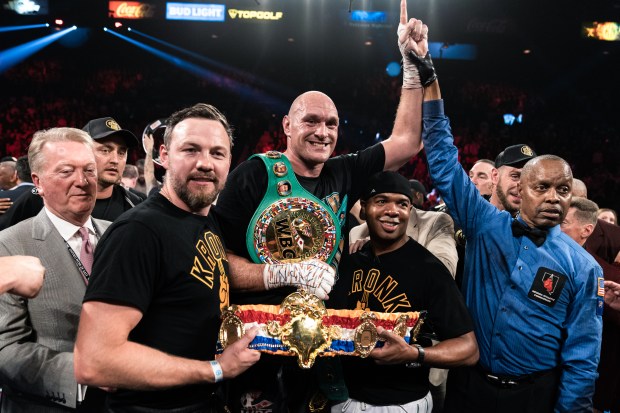 AJ’s promoter Eddie Hearn said in his most recent update: “We can’t wait. AJ has started his training camp and Fury has been training very hard. They all want the fight.

“There is no other fight out there that comes close for either guy. July is the date…

“Really I think end of next week it will be done.

“Talks have progressed extremely well and we’re closing in on securing the venue and there will be an announcement in due course.

“We’re at the stage where it’s probably best not to say much more than that.”

Eddie Hearn reveals the three unbeaten American heavyweights who are being eyed for Dillian Whyte’s next fight, Deontay Wilder not immediate target

Tyson Fury vs Anthony Joshua date: Latest news from Hearn on time and venue for heavyweight title clash after contracts for two-fight deal are confirmed

Eddie Hearn makes plea to Tyson Fury and John Fury for support in finalising Anthony Joshua fight, insists he is ‘confident as ever’ that clash will happen

Deontay Wilder names his top three KOs and includes Tyson Fury draw because, ‘I definitely knocked him out’