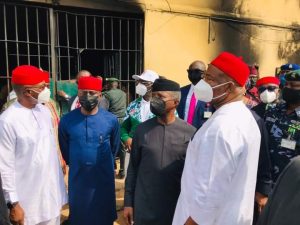 Vice-President Yemi Osinbajo has said that the gunmen behind the attacks on Police Command Headquarters and the Federal Prison in Owerri, Imo state will definitely face the law.

Speaking during his visit to the affected facilities on Tuesday, Osinbajo condemned the attacks on the two federal facilities, describing the perpetrators of the attacks as cowards.

Osinbajo added that the jailbreak which led to the release of “dangerous criminals” has put women, men, children, and their possessions and livelihoods at risk.

The vice president disclosed that the search for the escaped inmates “has begun in earnest”, noting that over 1,800 inmates escaped from the prison custody.

Osinbajo, however, assured Imo residents that security presence has been enhanced to ensure that peace reigns in the state.

He said: “An attack on the critical institutions of law enforcement, police stations and prisons is an attack on the safety, security and well-being of the citizens.

“It is not merely an attack on law and order. It is a mindless attack on the people and the way of life of the people. When you attack police stations and free dangerous criminals, you put women, men, children and their possessions and livelihoods at risk.

“It is in this beautiful land, that our county learned an enduring lesson on the futility of violence. But there are those who believe that to resolve issues and conflicts other than by violence is cowardliness.

“If the voices of their hatred prevails we will experience the terrible and fruitless loss of life that violence begets. Our system is not perfect, and we can seek to perfect it.

“There is no earthly system that is perfect, but what democracy and the institutions of democratic governance provide, are channels, however imperfect for seeking redress for injury, for peacefully addressing the problems that ail us.

“There are many who are working tirelessly everyday to improve our system, to build up and to enhance it. We must therefore, reject the agents of anarchy that seek to weaponise the frustration and discontent of young people, for their own profit.

“The path of violence can only lead to disaster, that consumes everyone, at least to the desolation of our communities. It is easy to take peace for granted, but we need not learn the value of peace through the horrible crucible of war.”

Also speaking, Minister for Interior, Ogbeni Rauf Aregbesola, had described the perpetrators as criminals, adding that he received the news of the coordinated attacks in Owerri with sadness.

He further described the incident as the worst on Police and Correctional facilities in the history of the country and said that it was a declaration of war against the Nigerian state to stop them from defending the people.

While assuring that security would be beefed up in all Correctional Centres in the country, he assured that inmates who voluntarily returned to the centre would be given amnesty while those who were still on the run would be looked for.

He, therefore, enjoined community leaders and Royal fathers to assist in looking for them as it was dangerous to allow them to live around.