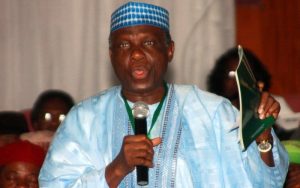 Naija News recalls that the former Director-General of the Nigeria Television Authority (NTA) was a member of the Board of Trustees of the PDP when he decamped in March 2018.

Addressing PDP members in Bida, Niger State, on Wednesday, during a reception to mark his return to the party, Gana said the ruling All Progressives Congress (APC) has failed Nigerians.

He opined that the APC and President Muhammadu Buhari has failed to fulfill the promises they made to Nigerians in the 2019 general elections.

Gana said the country is nosediving and needs urgent rescue from the Buhari-led government.

He asserted that there’s no government In Nigeria, asking the PDP to take over Niger and the country and salvage it from the deflated state that it is under the ruling APC.

“I tell you, we are going to go around strategically, in such a way that the All Progressives Congress (APC) so called government, whether in Niger state; is there a Government in Niger State? Because many people are not aware, or at the Centre? At federal level, we don’t even have a Government.”

The former minister returned to the PDP alongside many of his supporters ahead of the 2023 general elections.

Time To Pay Government Back For Its Actions – Nnamdi Kanu