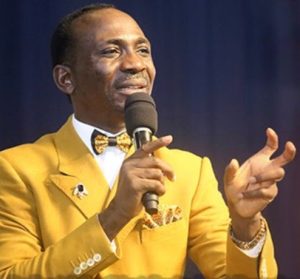 Founder and senior pastor of the Dunamis International Gospel Centre, Dr Paul Enenche has called on President Muhammadu Buhari to step aside from his position.

The renowned Nigerian clergy while lamenting over the spate of attacks, kidnapping and killing of lives daily by bandits, said the only disaster the country is having now is its leadership.

Naija News reports that Enenche stated this while addressing his congregations in one of his sermons. The musician man of God lamented the widespread insecurity in the country, saying the government has failed the people.

He said it is not by force for Buhari to rule and that if the president knew he wouldn’t be able to rescue the nation, he should humbly resign.

Enenche said: ”Is it by force to rule? If you can’t can’t you resign? Is it by force? Things are going out of control at various level and people are still sitting there until everybody dies?

”The time has come when they say enough is enough. It is not even time to blame the kidnappers or the bandits, where are the people in authority that can make kidnapping end in under seven days if they want?

“And then the people they kidnap passed through roadblocks, and people are sitting and priding themselves, I am chief this and chief that. Useless chief for nothing. If we wait for authority everybody may die in calamity, Jehovah has to arise on behalf of this nation,” the clergy added.

Enenche stressed that “the only disaster we have in Nigeria is disastrous leadership. If somebody is watching and blood is flowing, it is either he is a killer or he is a sponsor of killers or he is excited at the killings, that is the scenario of our nation, truth must be told.”

APC Is A Colossal Disaster – Actor, Ugezu J Says As He Reacts To Heightened Insecurity In Nigeria

The Enemies Of Nigeria Are Within Its Leadership – Apostle Suleman