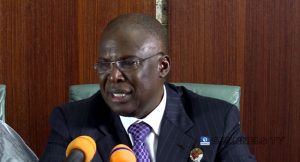 The allegations that two of President Muhammadu Buhari’s ministers are at loggerheads over the constitution of the Niger Delta Development Commission (NDDC) board has attracted a reaction from one of them.

The Minister of State for Petroleum Resources, Chief Timipre Sylva who is accused of being at war with the Minister of Niger Delta Affairs, Senator Godswill Akpabio, over the latter’s nominee for a substantive Managing Director of the NDDC has denied the allegation.

Sylva in a statement on Tuesday in which he reacted to the allegation by seven traditional rulers who had in a letter they addressed to President Muhammadu Buhari kicked against alleged moves by Sylva to upturn Akpabio’s nomination of one Elder Denyanbofa Dimaro, who hails from Peretorugbene in Ekeremor, Bayelsa West, as the substantive Managing Director of the NDDC declared that nothing of such is happening.

According to a statement signed by his Special Adviser, Media and Public Affairs, Julius Bokoru, the Minister said the allegations are lies that should be discarded.

He said he enjoys an excellent working relationship with Akpabio and both of them are committed to making the Niger-Delta region a better place.

The statement noted that the allegation is “a string of poorly thought-out and poorly crafted lies that should be totally disregarded and discarded.”

Adding that “Sylva is currently hosting the Nigeria International Petroleum Summit (NIPS) and while he has the development of the Niger Delta at heart, he is not fixated on who becomes who in the formation of the NDDC board.

“He rather hopes and prays that for the sake of the development of the region, competent, committed, compassionate and patriotic people get appointed.

“The architects of that story conveniently forgot to mention that the appointment of the NDDC executive members is strictly the prerogative of the President of the Federal Republic of Nigeria.

“The public is thereby advised to disregard that report as it is totally untrue, malicious and engineered purely for mischief.

“Sylva will continue building harmony amongst Niger Delta leaders, the Honourable Minister will attract even more development to the region as he is doing and will keep working towards a more peaceful South-South region.”

In other news, the Minister of Information and Culture, Lai Mohammed on Monday said Twitter is the social media platform of choice for the leader of the proscribed Indigenous People of Biafra, Nnamdi Kanu, to “destabilise Nigeria”.

The minister made this accusation on Monday evening during an interview with BBC News Africa.

Mohammed who defended the Federal Government’s Twitter ban, added that the Buhari government would not allow separatist set the country on fire.

Tension As Ex-Militant Leader Gives Buhari Deadline To Set Up NDDC Board, Or….