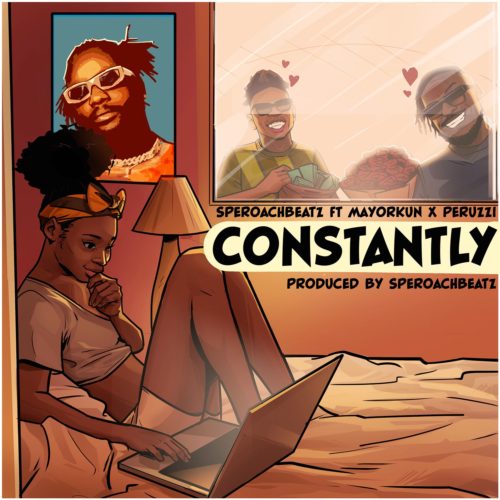 The Jam which Mayorkun has been previewing on social media (Constantly) owned by SperoachBeatz with additional vocal from Peruzzi is Finally Out!!!

DMW/30BG in house producer, SperoachBeatz drops his debut single titled “Constantly“, he employed the services of the label’s melody machines, Mayorkun and Peruzzi to deliver this Afropop – Amapiano tune.

Speroach is an Award winning producer who started producing professionally in the year 2013. He met with Peruzzi and become his personal producer. When Peruzzi signed a record deal with Davido Music Worldwide (DMW), Speroach Beatz became affiliated with the label too. He came to limelight in 2018 after producing the song ‘Amaka‘ by 2Baba (which featured Peruzzi). The song trended for several months and topped different music charts in Nigeria and outside. He followed this up with another hit song, Assurance by Davido. This song was also released in 2018 and Since that moment he has grown into one of the highly paid music producers in Nigeria and Africa.

Speroach Beatz made further success in 2019 with the production on Peruzzi’s mega hit – ‘Majesty‘ and Davido’s mega hit song ‘Risky‘ (featuring Popcaan). Also in 2020 when he produced another hit song for Davido, “Holy Ground” (which features Nicki Minaj).

Mayorkun is one of Nigeria’s big Pop act. He made his debut in 2016 with ‘Eleko’ and has since then won several awards including the Headies Next rated in 2018 & has also steadily churned out back to back hits under Davido’s music imprint – DMW. He has performed at the wireless main stage in 2018, the O2 Arena in Jan 2019 and has sold out numerous concerts both home and abroad. He released his debut album ‘The Mayor Of Lagos’ in Nov. 2018, a classic body of work which features chart topping singles; Mama, Che Che, Bobo and more.

Peruzzi Born Tobechukwu Victor Okoh, is known for his soulfully expressive vocals, humble attitude, passionate creativity, strength and commitment to his music all while maintaining a vibe and eclectic energy. He released his first single in July 2017 titled, ‘For Your Pocket’ which caught the ears of DMW boss, Davido, who jumped on the remix. Shortly after he got signed to DMW, he whipped up Davido’s multiple award winning ‘Fia’, ‘Ada’ (ft DJ ECool), ‘Doe’ (ft Larry Gaga) and 2Baba 2018 summer hit “Amaka”, which he featured on. In March 2018, Peruzzi dropped his first official single under his new label, DMW which gained major airplays and rocked major charts in Nigeria and beyond. Peruzzi recently released ‘Rum & Boogie’ album.

Today June 4, 2021 the trio premieres a new single titled “Constantly“. This jam has been on Repeat since it release. It’s highly addictive, well spiced with catchy lyrics, wordplays, melody and vibe. Listen and Enjoy!

Davido Hints On New Club Banger With Zlatan and Mayorkun