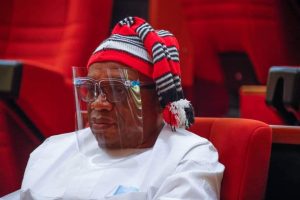 Senate Minority Leader and senator representing Abia North in the National Assembly, Orji Uzor Kalu, has alleged that there is an attempt at sabotaging the presidency of Muhammadu Buhari.

Speaking during an interview on Channels Television on Monday, Kalu said the myriads of security challenges in the country show that some people are sabotaging the effort of the president.

He, however, asked the Federal Government to tackle the issue of insecurity in the country by collaborating more with governors and other stakeholders.

“Anywhere you have no police to police the society, it means the society is failed because the major job of a government is to protect lives and properties of the citizens. Once that kind of aspect fails, we are in trouble,” he said.

“I believe there is sabotage to the Presidency of Muhammadu Buhari. A lot of sabotage, things are on duty to sabotage him, the society.

“The Federal Government should cooperate with the state governments. We have done well as a party in many areas but security is key and we need to address this issue, come together.”