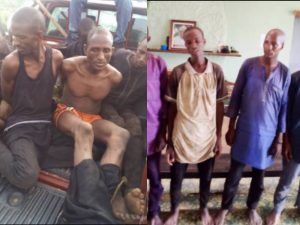 No fewer than six bandits terrorising the Kajola Local Government Area of Oyo State have been arrested by men of the state chapter of Operation Amotekun.

Naija News understands that the Amotekun corps in a joint operation with the Oodua Peoples Congress (OPC) and Vigilante Group of Nigeria (VGN) nabbed the criminals with deadly weapons inside a forest in the axis.

A statement released by the commander of the Amotekun in the state, Col. Olayinka Olayanju, confirmed that about 183 Cows and cash were seized from the bandits during the raid at their hideout.

Olayinka explained that the operation was carried out while on their joint routine patrol in the early hours of Thursday, April 29.

He gave the names of those arrested as Awali Atine, Ibrahim Abu, Shuaib Balau, Ibrahim Musa, Abdullah Masika and Umar Aliu Masika. He further disclosed that all the six suspects are of Fulani extraction and the arrest was carried out along Okeho-Ilua and Okeho-Iseyin Road around 4 am on Thursday (today).

Olayinka added that the bandits’ modus operandi is to pretend like herdsmen in the day and violently robbed innocent passengers on the highways at night.

“Those with the necessary information that could help the law enforcement agencies in their investigation are enjoined to report to the nearest police authority for proper investigation,” Olayinka noted.

Naija News understands that the suspects alongside the cows, weapons and money seized from them have been handed over to the Nigeria Police Authority, Okeho Divisional Headquarters.

Meanwhile, some yet to be identified gunmen reportedly kidnapped seven traders in Nasarawa State on Tuesday, Naija News reports.

Abdulsalami Reveals Number Of Illegal Weapons In Circulation Across Nigeria