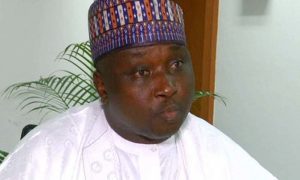 The majority leader in the House of Representatives, Alhassan Ado-Doguwa, has dismissed reports that some All Progressives Congress (APC) lawmakers are planning to dump the party for the Peoples Democratic Party (PDP).

In a statement to newsmen, he stated that APC lawmakers are too united and fully focused to working with President Muhammadu Buhari.

Ado-Doguwa (APC-Kano) also stated that lawmakers are committed to finding a lasting solution to the security challenges rocking the nation.

“I wish to affirm without any doubt that the infantile claim of the minority leader that some members of the APC in the House of Representatives are thinking of joining the PDP remains a figment of his imagination and that of his co-travellers on that journey,” he said.

“With all emphasis, I say that members of the APC are focused, too united, determined and fully committed to working with President Muhammadu Buhari and standing in one accord with all Nigerians at this time to find a lasting solution to the challenge of insecurity that does not recognise partisan tendencies.

“We believe that working together with the leadership of the House of Representatives, under the leadership of Speaker Femi Gbajabiamila, who had pushed concrete legislative support actions to stem the tide of insecurity challenge.”

He said the setting up of a non-partisan broad spectrum special ad-hoc committee on security is currently working out the modalities to hold a week-long crucial security summit, where statesmen, security chiefs, and other relevant stakeholders will converge to proffer solutions to the rather lingering security problems bedeviling our country.

“Without doubts, we shall be counted as an integral and veritable partner and component that worked to defeat this national challenge, and when we do, which will be soon, it will be all reasonable hands on deck.

“This is our sacred commitment as members of the APC in the 9th House of Representatives beyond the lousy tendencies of a sinking opposition party,” he said.

PDP, APC Trade Words Over Alleged Plot To Give Land To Herdsmen In Ekiti