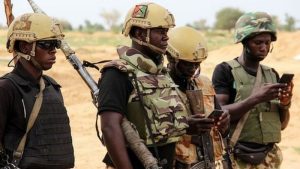 In a statement on Monday, spokesperson of Nigerian Army, Brig.-Gen. Mohammed Yerima, said on 2 May 2021, another band of terrorists attacked Ajiri town of Konduga LGA of Borno state.

He, however, said two soldiers and several civilians were killed, while many houses were burnt by the terrorists in Konduga.

The statement reads in part: “The terrorists in their numbers attempted to disrupt the peace that has been enjoyed by the border town but were met with stiff resistance as the troops in the area took them on a fierce fire fight which lasted about an hour.

“The terrorists withdrew in disarray with a large number of them suffering fatal injuries leaving behind several weapons and ammunition including anti-aircraft gun barrel, AK 47 rifle, hand held communication radio and different calibers of ammunition.

“In a related development, on 2 May 2021, another band of Boko Haram Terrorists on a criminal mission attacked Ajiri town of Konduga LGA of Borno State.

The terrorists who had reached a part of the town initially burnt 9 houses and killed some innocent residents before they were engaged by the troops deployed in the area.

The retreating terrorists went away with various degrees of gun shot injuries while the gallant troops are on their chase. Unfortunately, however, 2 personnel paid the supreme price in the resulting encounter.”

1 Killed As Troops Clash With Boko Haram In Borno