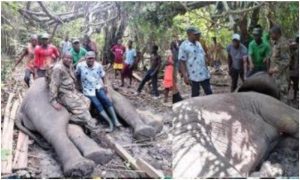 Deep concerns have been raised and expressed by the Elephant Protection Initiative and some conservatives after a local hunter illegally shot dead a massive elephant in Ogun forest.

It is understood that this is the 4th Elephant that has been illegally shot dead in 2years.

According to the Elephant Protection Initiative, the Elephant was shot dead near a forest not far from Lagos.

Reacting to the news, concerned Nigerian talked about how the actions of this local hunters set back conservation efforts.

One Abubakar Adam Ibrahim tweeted, ‘‘4th Elephant killed near Omo Forest, close to Lagos, in 2years, setting back conservation efforts. These people celebrating this have no understanding of what they have done”