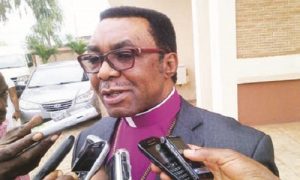 President Muhammadu Buhari has been asked to resign his position over the inability to save the country out of the present security quagmire.

The Archbishop of Enugu Ecclesiastical Province, Anglican Communion, Most Rev. Emmanuel Chukwuma, made the call on Wednesday while addressing a press at his 31st Episcopal ordination, Naija News understands.

The clergy who lamented over the current state of the nation under Buhari’s leadership asked the president to step aside as Nigerians had lost total confidence in his administration.

Chukwuma condemned in totality the endless security challenges and killings across the country, warned President Buhari against pushing the country into a coup situation. He said: “We are calling on the Government to declare security emergency because things have got out of hand and if they can’t do something about it, let them leave the Government.

“They should not move this country to a coup situation.”

“If it is not done, I predict a revolution and it will be such that even the high and mighty will have no hiding place.”

The Archbishop described the present National Assembly as the worst in the history of the country.

Meanwhile, Vice President Yemi Osinbajo has cautioned against another civil war, noting that the country may experience big conflict if the elites failed to speak up the truth and tell the truth to their immediate communities.

Naija News reports that Osinbajo stated this while addressing a forum of the All Progressives Congress (APC) organized by Anambra governorship aspirants and party patriots at the Federal Capital Territory in Abuja on Wednesday.

South-East People Have Lost Faith In Their Governors – IPOB