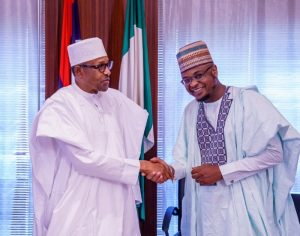 The National Association of Seadogs also known as the Pyrates Confraternity has insisted that the Minister of Communications and Digital Economy, Isa Pantami must resign.

This is as the group accused the presidency of lying about its submission that Pantami made extremist remarks when he was young but has now changed.

The pyrates lamented that it was absurd and an insult on the people of Nigeria for the presidency to insist that Pantami should remain in power when evidence points to the fact that he may still have connections with terrorist groups.

The confraternity in a statement by the NAS Capoon, Mr Abiola Owoaje titled ‘Isa Pantami Must Go,’ stated that presidential spokesperson, Garba Shehu lied to Nigerians that Pantami has cut ties with the Salafist ideology.

It accused the administration of President Muhammadu Buhari of harbouring a self-confessed sympathizer of terrorism in its government.

Owoaje in the statement noted that rather than use the incident to demonstrate its commitment to the fight against local and global terrorism as well as affirm Nigeria as a secular state as enshrined in the constitution, the Buhari government chose to defend Pantami and fail to rise above sectarian interests.

The full statement reads: “The National Association of Seadogs (Pyrates Confraternity) views this imprudent and logically-deficient defence of Pantami by no less than Nigeria’s Presidency as an ill-judged action that provides a safe haven for a self-confessed sympathiser of terrorism and the attempted imputation of motives to critics, a transparent ruse to deflect public opinion from the deluge of calls for his resignation or removal from office.

“The hollow argument that Pantami was in his 20s when he made those inflammatory utterances was a brazen lie from the seat of Nigeria’s government. There is sufficient evidence in the public space that indicate that Pantami who is now 48- years- old, was in his 30s and already an adult when he espoused the dangerous Salafist ideology which is one of the bedrocks of global terrorism. There is no proof presented by either Pantami’s personal defence or in Mr Shehu’s impotent allocutus, of where and when, the ‘repented’ Minister actually cut ties from the Salafist doctrine that he so strenuously advocated for several years.

“The Presidency’s curious explanation that Pantami’s allegation of being a campaigner of global terrorism is a lesser infraction than the forgery allegation that led to the resignation of the former Minister of Finance, Kemi Adeosun, stands logic on its head. This shameful non-explanation strongly suggests that the Buhari administration is so deeply infected with bigotry that the defence of a Minister is informed by factors more primordial than the integrity of governance.

“For the avoidance of doubt, we believe that President Buhari’s decision to retain Pantami as Minister despite documented evidence of him being unsuitable for that position in the first place, going by all ethical benchmarks that dictate the selection for public officers, is an indication that his appointment and subsequent clearance by the security agencies and the Nigerian Senate was not an happenstance. It is an awful indication of failure in the process of selecting citizens fit for public office and exposes the character deficit of the Buhari administration.

“It is heart-breaking that the Pantami controversy has further underscored the appalling level to which governance has degenerated under the Buhari administration. Almost in all facets of governance and its war against terror, including intelligence gathering and combat operations, the Buhari administration has repeatedly exhibited gross incompetence, corporate irresponsibility and narrow-mindedness in choices that should not have been taken in the overall interest of the country.

“For a country that is ranked third in the Global Terrorism Index; where insurgents have killed an estimated 36,000 persons and displaced two million from their homes, according to the United Nations, the Pantami saga presented the Buhari’s Presidency with a rare opportunity to demonstrate its commitment to the fight against local and global terrorism and regain public trust. But yet again, the administration in its characteristic culture of impunity could not rise above sectarian interests.

“The Presidency’s spurious defence is unsatisfactory and we repeat the urging of millions of Nigerians – Isa Pantami, must go! The Federal Government should underline its commitment to religious plurality and democratic ethos by disengaging this crusader of religious extremism. The more determined the Buhari administration is to ensure Pantami keeps his job, the more the administration becomes insensitive, irresponsible and dishonourable.”

Meanwhile, members of the Islamic State-backed faction of Boko Haram, the Islamic State West Africa Province (ISWAP), are reportedly inducing residents of Geidam, Yobe State, with cash gifts while hoping to get some of them to join.

The group had shared N20,000 to well over 50 households as of Tuesday evening, HumAngle reports.

Alleged Terrorism: Presidency Under Fire Over Comment On Adeosun, Pantami