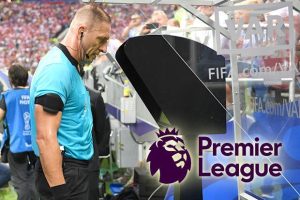 A few changes have been made to the English Premier League Video Assistant Referees (VAR) ahead of next season.

Starting from next season, the top level of the English football league system will adopt the use of ‘thicker lines’ in matches to determine marginal decisions, Naija News understands.

Sky Sports reports that the agreement was reached at the annual general meeting of clubs on Thursday, June 10 where there was a presentation by Professional Game Match Officials Limited [PGMOL] referees’ chief Mike Riley.

According to PGMOL, the new change will give an advantage to the attacking team. Naija News understands that the new change was as a result of VAR feedback from Premier League clubs last season.

It is however not confirmed if the thicker lines for offside will be used for FA Cup ties next season. Football lawmakers, the International Football Association Board [IFAB], do not specify a maximum thickness of lines, under the laws of the game.

FIFA, which has operational control of VAR, trialled semi-automated offside technology at the Club World Cup in 2019 in Qatar.

Meanwhile, a fine has been awarded to six Premier League clubs that secretly agreed to participate in a European Super League (ESL).

Naija News reports that the six English clubs affected have been asked to pay a combined £22m fine. This was disclosed in a statement signed by the Premier League and the Football Association on Wednesday, June 9.

European Super League ‘will NOT happen’, says Simon Jordan, who calls for ‘Big Six’ clubs to be thrown out of the Premier League if they push ahead with plans