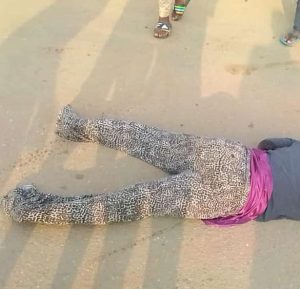 A policewoman has been gunned down in Imo State by some unidentified gunmen.

Reports had it that the assailants numbering about seven invaded the Orji area of Owerri on Thursday, June 3, at about 05:30 pm shooting sporadically.

Naija News learnt that the gunmen started their operation from Orji axis before heading to Spibat area and visited other areas from where three persons were killed, including the female police officer and two men. An eyewitness who spoke with newsmen said the gunmen who wore black emerged from Amakohia axis on two vehicles, a bus and Hilux, walking the road with utmost confidence.

It was gathered that the slain policewoman was abducted the day the gunmen attacked Orji police station. They were said to have returned with the officer during their operation on Thursday after their demand to exchange the officer with their members held did not work out.

Irked by non-compliance to release their member, they were said to have shot the female officer on the road.

“They came with the female police officer. I learnt that they kidnapped her the day they attacked Orji Divisional Police Headquarters. They dropped a message that they will only free her if their member in police custody was ready. Having waited without their demand being met, the hoodlums, came with the officer, brought her out and shot her dead.” the source claimed.

Reacting to the incident, the spokesperson of the State Police Command, Bala Elkana, said: “Normalcy has returned to Orji area by combined teams of the Police and other supporting security agencies. Three persons were killed by the hoodlums who blocked Orji flyover and started shooting sporadically. The cause of the shooting is still not clear at the moment. The investigation has, however, commenced.”

In another news, Naija News reports that a soldier attached to the 243 Recce battalion in Ibereko, Badagry, Mahmud Sulaiman, has committed suicide after he shot an officer of the Nigeria Customs Service.

It was reported that the incident happened on Wednesday night at the border with Cotonou, capital of Benin Republic.

A source who was at the scene of the incident noted that a senior military officer was trying to retrieve a gun from Sulaiman following his “strange behaviour” before the firearm went off.

Most Of Unknown Gunmen Who Attacked Imo Are Not Igbo – Uzodinma