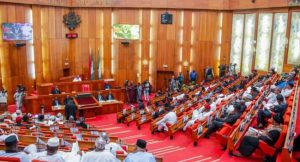 The Nigerian Senate has asked Nigerians to send petitions over the appointment of a presidential aide, Lauretta Onochie, as a National Commissioner at the Independent National Electoral Commission (INEC).

Recall that Senate President Ahmad Lawan, on Wednesday, directed the committee on INEC headed by Senator Kabiru Gaya to screen and possibly confirm Onochie and 5 others as INEC commissioners.

Lawan’s directive to the committee came after President Muhammadu Buhari had sent Onochie’s name and others to the National Assembly in October 2020.

Speaking with newsmen on Wednesday, Senate spokesman, Ajibola Basiru, asked Nigerians to petition the senate if they think is not qualified to be an INEC national commissioner.

The lawmaker said the fact that the nomination was referred to a committee does not mean she will automatically be confirmed.

He said: “As Nigerians if you feel she is not qualified, you are entitled to file a petition before the committee.

“I challenge Nigerians who strongly believe that the nomination is inappropriate to approach the committee and challenge it in the exercise to see that the country is governed according to the law.

“The fact that a matter is referred to a committee does not mean that the committee will affirm to such confirmation, and I agree, in the past, there have been instances where references have been made to committees, and they were returned unconfirmed or stepped down by the committee.

“I would rather say that we keep the gunpowder till the committee comes up with recommendations.”

SReacting to the suspension of Twitter operations in Nigeria by the federal government, Basiru said the senate will address the ban of the microblogging platform, “at the appropriate time”.

“As a lawyer, I am of the opinion that whatever the basics of rule of law, is that there will be legal basis for legislative and executive actions,” he said.

“So, I’m not here to talk about that. But if the senate considers it, we will be able to have a front. We will address it at the appropriate time.”

Lagos Assembly: Buhari, NASS To Get Protesters’ Petition Over Insecurity