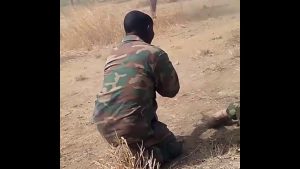 A soldier attached to the 243 Recce battalion in Ibereko, Badagry, Mahmud Sulaiman, has reportedly committed suicide after he shot an officer of the Nigeria Customs Service.

Naija News had earlier reported that the incident happened on Wednesday night at the border with Cotonou, capital of Benin Republic.

A source who was at the scene of the incident noted that a senior military officer was trying to retrieve a gun from Sulaiman following his “strange behaviour” before the firearm went off.

He said, “In the process of retrieving the cocked weapon from him, which he resisted, he accidentally fired a shot and the stray bullet hit one Inspector of Custom, C.N Walter.”

“The customs officer, who was attached to Seme Border Area Command, was rushed to Badagry General Hospital for treatment.”

“But unfortunately, the customs officer died at about 6:40 a.m. on Thursday in the hospital. Subsequently, Sulaiman also shot himself and died on the spot.”

As of the time of filing this report, both the Nigerian Army and the Nigeria Customs Service are yet to respond to the incident.

Just in :- Man commits suicide after catching his fiancée in bed with ex-boyfriend