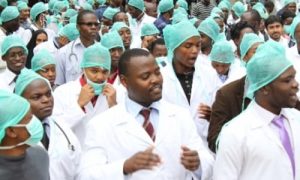 Nigerian doctors have knocked the Minister of Labour and Employment, Dr. Chris Ngige, for disparaging them and spreading falsehood about the ongoing industrial action.

The doctors made this known in a communique issued at the end of a virtual extraordinary National Executive Council meeting of NARD on Wednesday.

According to the National Association of Resident Doctors (NARD), there is no going back on their resolve to continue its strike until all their demands are met.

The association also mocked Ngige, who received stupendous allowances while serving as a senator, for justifying the government’s refusal to increase the hazard allowances of doctors.

“The hazard allowances have remained N5,000 for over 30 years. For the Minister of Labour and Employment to feign ignorance of this on national television today leaves a lot to be desired.

“This is an all time low coming from someone who has been in the Nigerian Senate where monthly hardship allowance for senators is N1,​242,122.70,” it said.

The doctors also accused the federal government of being insincere in its response to their grievances.

The association said that contrary to claims by Ngige that the doctors failed to give ample notice before embarking on strike, a two-month ultimatum was given by the doctors.

It also noted that the Memorandum of Action signed was after 12am on March 31, 2021 when the ultimatum had elapsed.

It said; “The NEC unanimously voted that the ongoing total and indefinite strike that started on the 1st of April 2021 be continued until the federal and state governments of Nigeria meets up with our demands.

“The NEC painfully observed that despite all the efforts of by the National Officers Committee (NOC) to ensure that the Federal Government do the needful to prevent the ongoing strike, Government has continued in their insincerity of promises hence the current stalemate.

“NEC also noted that the Memorandum of Action signed was after 12 midnight on 31st of March, 2021 when the ultimatum had elapsed. Without prejudice to the labour laws and other extant laws of the land, the industrial action had already begun before the MOA was signed and as such, not tenable,” it added.

“They noted the admittance of the Hon Minister of state for health who wholeheartedly agreed that all the issues raised by NARD in her communique are germane and legitimate and further admitted that bureaucratic bottlenecks in government led to delay/ non-implementation of previous memoranda signed with NARD.

“For the avoidance of doubt, the NEC stated clearly that the Nigerian Association of Resident Doctors is not a financial arm of the Nigerian government and therefore not involved in any form of payment of residency training funding as was alleged in the meeting called at the instance of the HMoLE (Honourable Minister of Labour and Employment).

“To set the record straight, the offices and officers involved are the National Postgraduate Medical College of Nigeria and her Registrar as well as the Office of Hospital services and her Director. When the errors in payment were noticed, NARD informed both bodies appropriately for further action as may be necessary.”

After appraising the government’s response to its demands, the association said the industrial action goes on although it is still mindful of its oath to take care of patients.

“We want to use this medium to reiterate our commitment to the smooth running of all tertiary institutions in the country and the provision of specialist healthcare to Nigerians but we need to first of all care for our own health and welfare in order to give standard care to our patients. This is in line with our physician oath.”

Doctors Will Be Responsible For Any Death During Strike – Senate

Yemi Alade Vows Never To Lend Anyone Money After Being Deceived