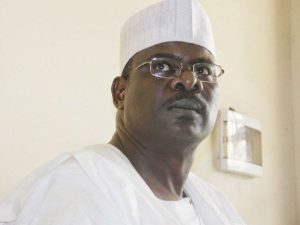 Borno South Senator, Ali Ndume has lamented that the federal government is currently not doing enough in the fight against Boko Haram and other terrorist groups.

Specifically, he noted that the amount devoted to security issues compared with the country’s total budget is nothing to write home about.

Ndume who is also the chairman of the Senate committee on army said even poorer nations than Nigeria are spending more on security than the country is doing.

The lawmaker who spoke on Thursday during a Channels TV programme said budgeting N29b as capital funding for the military out of a total national budget of about N13tr doesn’t show Nigeria is ready to confront its security challenges.

According to Ndume, “If your house is on fire, are you going to measure the water to put off the fight? We are in trouble in the north-east particularly,” he said.

“Go and check the Nigerian army budget for this year that we want to review upward; it is less than N30 billion for capital and that is what they used to buy ammunition and other supplies (that) we are talking about.

“It is less than N30 billion and the budget of Nigeria is more than N13 trillion. Does that show any seriousness in any way? If we do not have peace, then all these things you are talking about, of what use are they going to be?

“Go and check what Nigeria is spending on militarily and compare it with that of Chad that is poorer than us, or Niger (Republic). Go and see the Nigerian soldiers and the Cameroonian soldiers. Their kitting is different from our own. It is superior to our own despite the fact that they are poor because they placed priority on their security.”

Ndume added that most of the weapons the insurgents and terrorists are using to fight Nigeria are stolen from the country’s military during attacks.

“Most of the insurgents, they do hit-and-run. Like now, they are trying to do that because the heat is much from the Nigerian army, the new army commander is putting heat on them, they are desperate to get arms and ammunition.

“Most of the arms and ammunition they use are the ones they succeed in carting away from the Nigerian soldiers and other armed forces and security agencies.

“I know they have small arms coming up there from like Libya, Chad, and all that but the bulk of their equipment are those they succeeded in stealing from our armed forces.”

In other news, some communities in Niger State have reportedly signed a N20m peace deal with members of the Boko Haram terrorist group for the insurgents to avoid their communities.

This is also as some earlier reports claim that the terrorists have imposed taxes on residents of Shiroro local government area of the state.

It will be recalled that a few days ago, Naija News reported that the Niger State Governor himself, Abubakar Sani Bello cried out that Boko Haram insurgents hoisted their flag in Kaure village in Shiroro Local Government Area of Niger State.

Why War Against Boko Haram Can’t Be Won – Ali Ndume