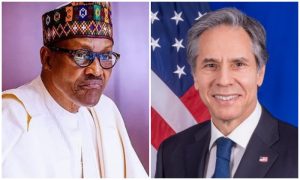 The United States of America on Tuesday noted that Nigeria is one of its most important partners.

The US stated this after the meeting between President Muhammadu Buhari, the Foreign Minister, Geoffrey Onyeama and the US Secretary of State, Antony Blinken.

The US in the statement released wrote, “With Africa’s largest population, democracy, and economy, Nigeria is one of our most important partners on the continent.”

“The year 2020 served as a historical benchmark, as Nigerians reflected on the opportunities and challenges the country faces while marking its 60th anniversary of independence and bilateral relations with the United States.”

“Nigeria is the largest source of immigrants from Africa to the United States, with more than 500,000 Nigerian-born American citizens and legal residents in the U.S.”

On his part, Buhari noted that Nigeria attaches great importance to relations with the United States.

“Let me in this connection express appreciation to President Joe Biden for his welcome and recent decision to appeal the immigration – to repeal the immigration restriction known as the Muslim ban on travel and visas for citizens predominantly from Muslim nations and African countries, including Nigeria,” he added.