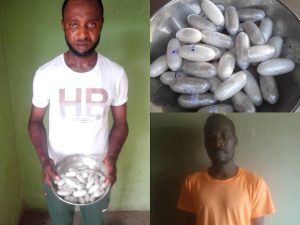 Illicit drugs worth N264 million naira has been seized from two drug traffickers nabbed at the nations’ capital city, Abuja.

Naija News understands that the 1.1kg weighing cocaine raps was seized from one Emeka Okoro and his accomplice, Ibrahim Bello who is said to be a top drug dealer.

Confirming their arrest in a statement made available to newsmen on Wednesday, April 28, the spokesperson of the National Drug Law Enforcement Agency (NDLEA), Mr Femi Babafemi, said Okoro was intercepted with 900grammes of cocaine in a commercial bus along Abuja-Gwagwalada road on Monday 26th April 2021 based on intelligence.

He disclosed further that Bello on the other side was nabbed with 200grammes of the illicit drug at the Zuba area of FCT at same day through a controlled delivery operation. Giving more details on the operation that led to the arrest of the suspects, the Agency’s Commander in FCT, Mohammed Malami Sokoto, said Okoro was planning to smuggle the illicit drugs to Libya through Kano and Agadez in the Niger Republic, when he was nabbed with wraps of cocaine weighing 900 grammes while the other seizure of 200 grammes was equally made following intelligence on the 26th April 2021.

He said: “The wraps of cocaine were not to be swallowed as has always been the case, but to be concealed in Jerry cans of palm oil and transported through the border in Kano to Agadez and Libya. The suspect, Emeka Okoro revealed that this has been the trend in the past months”

Meanwhile, operatives of the NDLEA a few days ago said it uncovered grammes of illicit drugs concealed inside the statue of the Blessed Virgin Mary.

Naija News reports that the agency while confirming the development in a statement on Saturday, revealed the contraband auto spare parts are bound for Canada and the Philippines.

Alex ‘Cowboy’ Oliveira was the street-fighting, bullfighting criminal who overcame drug addiction and survived a grenade attack to reach the UFC

CDQ Reacts After He Was Assaulted By NDLEA Operatives

NDLEA Confirms CDQ’s Arrest For Being In Possession Of Cannabis