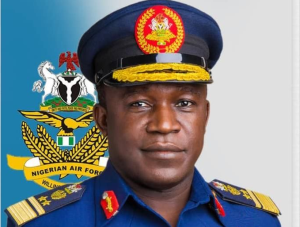 The Chief of Air Staff, Air Marshal Oladayo Amao has reiterated the stand that efforts are still ongoing to locate and rescue the pilots in the fighter jet that crashed on Wednesday.

The air chief made the revelation on Sunday in Borno while speaking with the troops of the air force component of Operation Lafiya Dole.

He also used the opportunity to emphasize the stand of the military that the purported video shared by Boko Haram where the group claimed responsibility for shooting down the missing jet is fake.

It will be recalled that the Nigerian Air Force (NAF) confirmed that one of its aircraft lost radar contact on Wednesday while on a mission in the Northeast.

Then Boko Haram terrorists on Friday claimed responsibility for the jet that was shot down and released footage showing its fighters shooting down a fighter jet mid-air.

But the military dismissed the video as fake, promising to locate the pilots onboard the jets identified as Flight Lieutenant John Abolarinwa and Flight Lieutenant Ebiakpo Chapele, as well as the possible remains of the jet itself which NAF said might have crashed.

Giving further updates on Sunday, Amao disclosed that no efforts will be spared in locating the ill-fated craft and those onboard when it crashed.

He said: “On the issue of the crashed NAF alfa jet which was declared missing on 31st March 2021 after losing radar contact, let me state clearly that the videos being circulated on social media alluding that the aircraft was shot down are false,” he said.

“From critical analysis of all available evidence, it is obvious that the air accident was caused by other factors which will be soon made public. You are all aware of the efforts we are making to rescue our pilots and recover the crashed aircraft.

“We are using this opportunity to brief on the next line of action and also to intensify the operation towards rescue of our missing pilots and recovery of our crashed aircraft.”

“The theatre command, the air force search and rescue team, as well as air component, are doing a lot to ensure that we get back those pilots and the aircraft that crashed. Surely the aircraft will be recovered. We will continue to sustain the efforts.”

He also delivered President Muhammadu Buhari’s message to the troops where he commended them for their dedication to duty in defense of Nigeria.

“We remember their sacrifices today, even as we celebrate the ultimate sacrifice that the Easter season signifies. May their souls continue to rest in peace and may we find our colleagues who are still missing in action,” he added.

Meanwhile, the Vice President of Nigeria, Yemi Osinbajo, on Sunday visited Ebonyi State following the killings in the state by assailants.

Osinbajo promised the people of Ebonyi State that justice will be served in the incident that led to the death of some people in the Ishielu Local Government Area of Ebonyi State.

The vice-president who was directed by the state Governor, Dave Umahi, also directed the National Emergency Management Agency and the Federal Ministry Of Humanitarian Affairs, Disaster Management And Social Development to assess the level of damage done by the assailants with a view of providing succour for the affected communities.

Chief Of Air Staff Blows Hot, Says Terrorists Will Be Brought To Their Knees