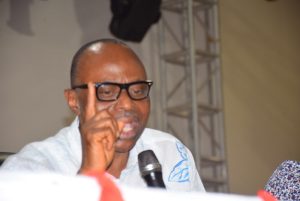 Former Ondo State Governor, Dr Olusegun Mimiko, has debunked reports that he is planning to dump the Zenith Labour Party (ZLP) for the All Progressives Congress (APC).

Reports had emerged that the former governor had concluded plans to join the ruling APC.

Mimiko is said to have held series of meetings in Abuja with the Attorney General of the Federation and Minister of Justice, Abubakar Malami, SAN, the Chairman of the APC National Caretaker Committee and governor of Yobe state, Mai Mala Buni as well as two other governors to prepare the ground for his defection to APC.

Sources had also claimed that part of the reasons the APC leadership wants Mimiko to join the party is because they feel the incumbent Ondo Governor, Rotimi Akeredolu is opposing the federal government on some national issues and seems not to be on the same page with the Villa.

“From the look of things, our man(Aketi) appears not to be on the same page with the Villa owing to his recent stance on certain national issues.

“So we are working hard to ensure the former governor joins us to take of the party because we cannot afford to toy with any state in the southwest”, the source said.

Reacting in a statement signed by his Special Assistant on Media, John Paul Akinduro, Mimiko said playing partisan politics was the least of his concerns at the moment.

While insisting that he would remain in the ZLP, he said he was more concerned about how to pull the nation back from the brink of disintegration.

He described his purported plan to defect to the APC as “a piece of fake news”.