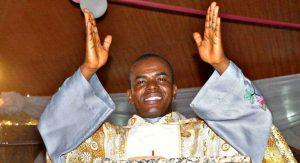 Naija News reports that the cleric stated this while addressing a congregation during the midweek service at the Adoration Ground of Christ the Life Bible International Church (CTLBIC), at Omuanwa in Ikwerre Local Government Area of the state.

He warned that Mbaka who once prophesied President Buhari’s victory against the former president, Goodluck Ebele Jonathan, should not be stopped from speaking the truth to power.

Recall that the Mbaka who is the leader of the Adoration Ministry in Enugu State recently faced some backlash after asking President Buhari to resign his position since he could not profer a solution to the nation’s biggest threat, insecurity.

Subsequently, the Catholic Priest announced the shutting down of the Adoration Ministry for a period of one month. A development suspected to be connected to the earlier directive given to him by the Catholic Bishop of Enugu Diocese, Bishop Calistus Onaga.

Okenna, however, in his submission over the recent developments, regretted that Nigerians were suffering and the people passing through hard times occasioned by poverty and insecurity.

He said: “That Father Mbaka prophecied that Goodluck Jonathan will lose the 2015 election to Buhari and that Buhari will be returned as president of Nigeria in 2019 and his prophecies came to pass, does not stop him from speaking the truth when things are going wrong. And it can never be a crime against him.

He added: “I must advise our leaders to listen to the voice of the Lord through his servant, do what is right and stop fighting him. Nigeria was supposed to be appreciating Mbaka for speaking out on the security challenges facing the country when so many pastors and stakeholders are silent”.

They're After Me — Borno Cleric Who Exposed Pantami In A Letter