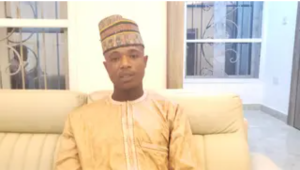 The mastermind of over 300 student’s abduction in Kankara, Katsina State, Auwal Daudawa, has returned back to the forest, less than three months after his repentance.

The development was confirmed by a security source and two others sources close to the bandits, Daily Trust claims.

It was gathered that Daudawa has relocated to one of the forests, near the border with Katsina.

Daudawa coordinate the abduction of the students of Government Secondary School Kankara, on December 12, 2020.

Two months after the incident, Daudawa was paraded before the governor in Gusau, where he declared his repentance.

The bandit leader and five of his lieutenants surrendered 20 AK 47 rifles, ammunition and a rocket-propelled grenade (RPG) launcher, during the ceremony.

Sources disclosed that the bandit packed out his family and his lieutenants back to Jaja forest in Zurmi Local Government on Monday.

“He called one of his contacts in Gusau to inform him that he had arrived at the forest and decided to pick up arms again. He did not inform anybody before he left,” one of the sources said.

Daudawa was said to have been frustrated by the lack of proper engagement after he had laid down his arms.

The state government had housed him with his members and family in a chalet for weeks before a house was secured for him in Damba, in the outskirts of Gusau, to move in with his family.

“His upkeep was being shouldered by the government. I don’t know what it was he needed. Perhaps his tall expectations were not met,” one security source in Gusau disclosed.

A prominent bandit in the state, Shehu Rekeb, disclosed that more repentant gunmen will move back to the forest to avoid being targeted.

He accused government of insincerity in its dealing with the Fulani armed men.

A senior security official on Wednesday said that the collapse of the reconciliation deal was only predictable as it was not premised on a sustainable framework.

“Honestly, there is a problem with that arrangement because you cannot claim to have a peace accord when there is no paperwork where the parties sign on specified conditions,” he said.

BREAKING: Buhari Returns To Nigeria After Medical Trip To London

7 Years After Abduction: We Want To See Our Daughters Before We Die – Chibok Parents