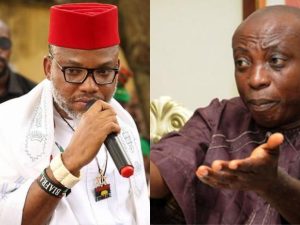 The leader of the proscribed Indigenous People of Biafra (IPOB), Nnamdi Kanu has lashed out against the founder of Movement for the Actualisation of Sovereign State of Biafra (MASSOB) Ralph Uwazuruike over his recent claims on the Eastern Security Network (ESN).

Kanu on Wednesday said Uwazuruike is under the influence of drugs and acts like a possessed person.

Naija News reports the IPOB leader’s statement comes after Uwazuruike of MASSOB had declared on Tuesday that the Eastern Security Network (ESN) established by IPOB is not a legal security outfit for the southeast region.

This is as he also declared that Nnamdi Kanu, leader of the proscribed Indigenous People of Biafra (IPOB) who set up the ESN has no power to set up such outfits.

Uwazuruike made his view known on Tuesday while speaking during an interview of TVC’s ‘Your View’ programme.

According to him, only Governors from the region had the constitutional powers to set up such outfits and that is why he and his group are embracing the ‘Ebubeagu’ recently set up by the governors.

He also blasted Kanu and ESN, saying the security outfit exists only on social media.

Responding to the claims, Kanu, through IPOB Media and Publicity Secretary, Emma Powerful, said they have decided to ignore Uwazuruike’s comment comparing his views to that of a possessed man who is also under the influence of drugs.

He said: “We don’t want to dignify Uwazuruike with response because people knew him very well that he is on drugs every time and he is flippantly talking like someone who is possessed.”

Meanwhile, the Senate has called on the Acting Inspector-General of Police, Usman Alkali Baba, to carry out a comprehensive investigation into the killings and kidnapping of citizens in Ebonyi state by alleged herdsmen.

The upper chamber made the call amid resolutions reached, sequel to the consideration of a motion brought to the floor by Senator Sam Egwu (PDP, Ebonyi North) during plenary on Wednesday.

Coming under order 42 and 52 of the Senate Rules, Egwu, in the motion titled: “urgent need for the federal government’s intervention to end the serial killing of innocent and defenseless citizens in Ebonyi state by alleged herdsmen”, bemoaned the general state of insecurity in the country.