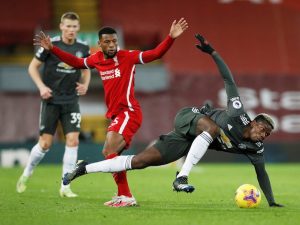 The clash between two English Premier League title rivals, Manchester United and Liverpool was put off on Sunday due to a massive demonstration by fans of the Red Devils, Naija News reports.

To calm anxiety on the unforeseen development, the Premier League management hours later released a statement that explained why the match was called off.

The statement reads: “We understand and respect the strength of feeling but condemn all acts of violence, criminal damage and trespass, especially given the associated COVID-19 breaches.

“Fans have many channels by which to make their views known, but the actions of a minority seen today have no justification,”

It added: “The rearrangement of the fixture will be communicated in due course.”

How the new European Super League will work and what we know so far as Man United, Man City, Arsenal, Liverpool and Tottenham sign up for breakaway competition that will change the face of football

Will European Super League rebels get another bloody nose by Premier League rivals? The price on offer for Arsenal, Chelsea, Liverpool, Man City, Man United and Tottenham to all lose their next top-flight game