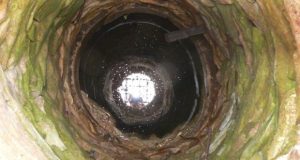 Residents of Tsalle, a community in the Gezawa Local Government Area of Kano State have been thrown in disarray after the discovery of a lifeless body of a day-old child in a well.

It was gathered that the body was recovered on Thursday, June 10. Confirming the incident in a statement, Alhaji Saminu Abdullahi, spokesman for the Kano State Fire Service told reporters that the service received a distress call at about 12:25 p.m. on Thursday from one Abubakar Ahmed-Dandago.

“On receiving the information, we quickly sent our rescue team to the scene at about 12:43 p.m,” he said.

Abdullahi disclosed further that the baby girl was brought out of the well dead, adding that the remains had been handed over to the Gezawa Divisional Police Station for further investigation.

The News Agency of Nigeria (NAN), however, reports that the identity of the child, especially her parents is yet to be unknown while initial suspicion was that the baby was thrown inside the well, dead already.

Meanwhile, friends and family are mourning the demise of Ebenezer Ayeni, a gospel music producer reportedly killed by armed robbers in Oyo State.

Naija News learnt that the gospeller was attacked and shot at in Ibadan, Oyo state capital on Thursday, June 10.

A friend of the deceased who disclosed the incident on his social media account said Ayeni was killed just a week to be joined with his lover.

Gunmen Murder Pastor Inside His Church In Abuja