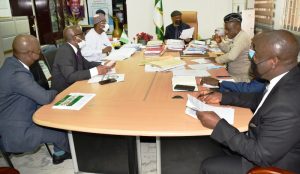 Judicial Staff Union of Nigeria (JUSUN) has threatened to embark on another strike action if the issue of non-implementation of financial autonomy of the judiciary which led to the first action is not addressed.

Naija News had reported earlier that the Judicial Workers on Wednesday announced the suspension of its strike action which lasted for two months. JUSUN asked its members to resume work on Monday, June 14.

However, the union in a statement on Thursday (today) explained that it only suspended the strike and not called off, stating that it will resume if agreements are not met after few months.

“At that meeting, we set up a 5-man committee to monitor the implementation of the agreement between the Governor’s forum and JUSUN,” Asanya noted.

Naija News understands that Asanya revealed this while conversing with reporters on the phone today. The Chairman regretted the lingering non-implementation of the financial and independence of the judiciary.

He added: “National Judicial Commission and Chief Justices prevailed on us to suspend the strike considering the suffering of the people.

“But if the implementation is not adequately followed, we may have no look for other options than to resume the strike.We only suspend it, not to call off,” Asanya reiterated.

JUSUN, NBA Walk Out Of FG Meeting As Ngige Refuse To Show Up

Why I Didn't Show Up At Meeting With JUSUN, PASAN – Ngige