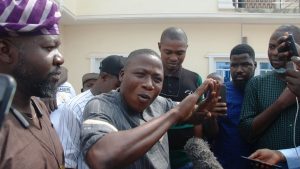 Yoruba freedom fighter and activist, Sunday Igboho Adeyemo, has escaped an attack by armed gunmen at his Soka residence, Ibadan, in Oyo state.

Naija News reports that the attack was made known Igboho’s spokespersons, Koiki Olayomi and Dapo Salami.

His aides revealed that the attackers stormed the house around 1:30 am and attempted to set it ablaze but they were resisted by the vigilant security aides of Igboho.

It was gathered that the gunmen and the guards of the activists exchanged gunfire.

Koiki warned that if the security agents did not leave his boss alone, it might be the beginning of the problem that the government was waiting for.

“We are not suspecting anyone, but we know that some people came. They came and they were resisted, that is just it.”

Salami who spoke with Vanguard in a telephone conversation said, “Yes, the hoodlums came to the Soka residence of Chief Sunday Igboho at 1:30 am but there was stuff resistance by our men.”

“I have not seen him this morning. But, the attackers couldn’t get to him. He is in a safe place now.”

Speaking to Vanguard, a resident “wondered why this present government was trying to curry problem for itself noting that why should the government be trailing someone who is just protecting his people when the government has failed to do so.

“There are criminals out there who have been bold enough to own up to attacks on some people, this same government is not after them. It appears the government wants to cause problem in the country”.