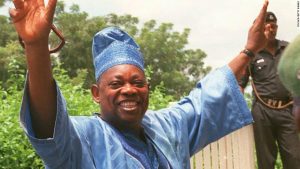 A documentary recognizing the late Chief MKO Abiola as the winner of the 1993 presidential election in Nigeria is set to be premiered on the tv, the presidency has revealed.

He also added that the documentary features two children of the late MKO Abiola — Kola and Hafsat as well as Mohammed, son of Gani Fawehinmi, the late human rights lawyer.

The documentary was filmed by Ose Oyemande.

“The documentary is to commemorate the third anniversary of the landmark decision by President Muhammadu Buhari to officially recognise the annulled election and award its winner, Bashorun M.K.O. Abiola, the Grand Commander of the Federal Republic (GCFR) national honour,” the statement reads.

“The film features President Buhari and dignitaries who were central to the annulled election and the events that followed, including General Abdulsalam Abubakar, Asiwaju Bola Tinubu, Kola Abiola, Hafsat Abiola-Costello and Mohammed Fawehinmi, son of legal luminary, Chief Gani Fawehinmi, who was also recognised with a Grand Commander of the Order of the Niger (GCON) national honour.

“With sections dedicated to the annulled election, the recognition process and the evolution of Nigerian democracy from Independence in 1960, viewers will be treated to a political documentary on the scale never seen in Nigeria’s film and television history with revelations from key actors.

“Filmed exclusively in Nigeria and directed by the award winning, Nigerian-American, Hollywood-based filmmaker, Ose Oyamendan, the documentary also traces the evolution of Nigerian democracy and the continuous quest for national unity.

“Viewers will also will also see and hear many others including Ambassador Shehu Malami, nephew of Sir Ahmadu Bello and son of Sultan Abubakar III, as they capture the spirit of Nigeria’s independence Day as never revealed before.”

Abacha vs MKO Abiola: Falana To Drag Al-Mustapha To Court Over June 12

Why June 12 Election Was Annulled – Obasanjo

South-West: There Will Be No Real Winner In PDP Congress – Doyin Okupe