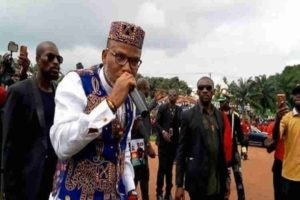 The proscribed Indigenous People of Biafra (IPOB) has denied the allegation it was importing explosive devices from Lagos to Imo State.

Naija News had reported that the Department of State Services (DSS) had claimed that the outlawed group was moving explosive devices from the South West state to the Southeast state.

But in a statement on Friday by its Media and Publicity Secretary, Emma Powerful, IPOB described the report as fake and laughable.

The group said its members were not terrorists with no need or intention to acquire explosives.

The statement reads in part: “The attention of the Indigenous People of Biafra (IPOB) ably led by our great leader Mazi Nnamdi Kanu has been drawn to the frivolous and concocted press statement by the Nigerian Department of State Services, DSS, that IPOB is moving explosive devices from Lagos to Imo State. The is is another propaganda by the agency to blackmail IPOB.

“There is no iota of truth in the said report. It’s fake and laughable. IPOB has no intention to acquire explosives. We are not terrorists and do not need explosives.

“Right from inception, IPOB has remained a peaceful movement. We know the antics of DSS and other Nigeria security agencies. They only want to demonise IPOB and other Biafran agitators to stain our global reputation.

“It’s only laughable that DSS cannot find where bandits, Boko Haram and other Fulani terror groups are in Nigeria but it easily concoct intelligence about IPOB and freedom fighters.

“This false alarm which is a smokescreen anyway is akin to their concocted intelligence about two weeks ago when they claimed IPOB had plans to invade banks to steal money for arms importation.

“But our intelligence unit uncovered their plot and we raised the alarm. Many didn’t believe us but later, criminals and cultists arranged by DSS robbed banks in Anambra and pointed accusing fingers at IPOB.

“What intelligence agency is DSS that cannot give accurate intelligence reports on the activities of terrorists but rather has a penchant in dishing out false intelligence on peaceful agitators! What a hypocrisy.”

IPOB also raised the alarm over what it described as the killing spree of Igbo people by Governor Nyesom Wike of Rivers State.

It alleged that no fewer than 30 innocent Igbo have so far been arrested and taken to an unknown destination, warning government should be held responsible if anything happened to them.