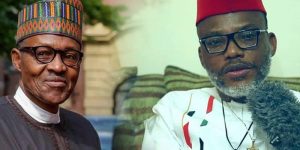 The leader of the Indigenous People of Biafra (IPOB), Nnamdi Kanu, has claimed President Muhammadu Buhari’s comments have backed the creations of the Eastern Security Network (ESN).

Naija News reports that Buhari had in an interview with Arise TV on Thursday, asked each of the 36 governors to find a way to end the rampant invasion by herdsmen across the country.

According to Buhari, he alone cannot do everything which was why he called on governors to find ways to solve the problem of insecurity in their respective day.

Specifically, the President mentioned that recently, two South-West governors visited him to complain about herdsmen encroaching on farmers’ lands in their regions but he told them to involve traditional institutions and community leaders in resolving the issues.

“You know these people more than I do, and you are democratically elected to protect your people. Don’t sit idly expecting me to do everything, take action,” he stated.

But reacting in a post on his Twitter page, Nnamdi Kanu said Buhari has admitted to his failures by shifting responsibility to the state governors.

He added that Buhari’s comments have confirmed that the ESN was established for the self-defence of the people of the Southeast.

“As the mask masquerading as Buhari shifts responsibility of stopping terrorist herdsmen to Governors, it confirms our assertions that Nigeria has become a failed sate. It also validates #ESN as a self-defense force to protect our people.” Nnamdi Kanu said.

Nnamdi Kanu Recruited Us To Train Over 4,000 ESN Members – Ex-soldiers

Biafra: What Buhari Must Do To Nnamdi Kanu’s IPOB – Sheikh Gumi