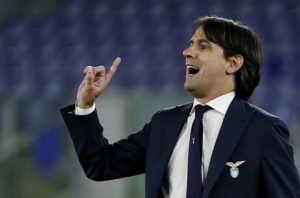 Naija News recalls that Antonio Conte left Milan in May 2021 with a year left off his contract with the club, after leading Milan to win the Italian football league trophy weeks ago.

Milan, however, in a statement released on Thursday, Inzaghi as its new manager signed on a two-year deal. Inzaghi, the younger brother of former Juventus and AC Milan striker Filippo, left Lazio last week after a five-year spell in charge, turning down an offer of a contract extension to instead take up the challenge at Inter.

Meanwhile, Belgian professional footballer who plays as a striker for Inter Milan, Romelu Lukaku, has confirmed he is staying with the club.

Naija News understands that Lukaku has been linked with a move to Stamford Bridge this summer transfer. The former Everton and Manchester United player has, however, said he is enjoying Milan and is not ready to leave.

Serie A: Romelu Lukaku Vows To Fight To Death For Inter Coach