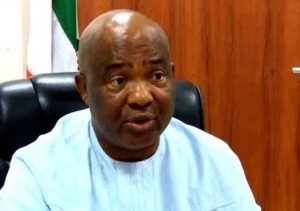 Security operatives have arrested a 42-year-old man, identified as Nnamdi Okafor from Amanachi community in the Orsu Local Government Area of Imo state.

Naija News reports that Okafor is reportedly the mastermind behind the recent deadly attacks in the state.

Recall that the country home of the state governor, Hope Uzodinma, was also recently attacked by gunmen who killed two security guards attached to the governor and burnt the building.

It was gathered that Okafor who was identified as a director of Pecubel Hotel.

Okafor was arrested at Aboha-Ohi around Lifeline Assembly, Owerri/Orlu Road in Imo state.

It was learnt that security operatives had been watching Okafor for some time before his arrest.

A source told Vanguard: “Nnamdi Okafor is from Amanachi community in Orsu Local Government Area of Imo state, he was arrested in April, around Lifeline Assembly in Aboha-Ohi along Owerri /Orlu Eoad in Imo.

“Okafor, male, 42 years. He’s the director of one Pecubel Hotel and has a pharmaceutical outlet in Lagos. He was arrested in connection with sponsoring /financing of the so-called unknown gunmen terrorising Imo state,” the source said.

The paper also said some others had been arrested in connection to the deadly attacks in Imo with one of the ring leaders’ name given as Izuchukwu Ohaeri.