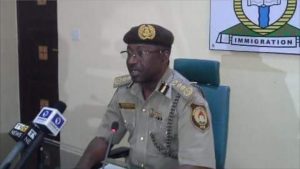 Naija News reports that this was made known in a statement released on Thursday and signed by CSI SK Kure.

Okpu replaces Sunday James (now a Comptroller) who has been deployed to head the Service’ Operations at Nnamdi Azikiwe International Airport (NAIA), Abuja.

The statement reads in part:

Okonjo-Iweala Appoints Four Deputies To Assist Her AS WTO boss