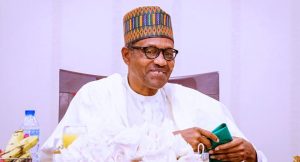 President Muhammadu Buhari has revealed more reasons behind the decision by his administration to construct a multi-billion naira railway project into Niger Republic.

The project valued at about $1.96bn is targeted at building a railway from Kano State in Nigeria into Maradi in Niger Republic and has attracted several criticisms from Nigerians who feel it’s a waste of scarce resources.

But defending the idea behind the project, the federal government said the railway project, expected to run from Kano to Dutse- Katsina through Jibia and end at Maradi in Niger Republic, would have great economic values and help Nigeria to compete and expand the economy.

Speaking further on Thursday during an interview on Arise TV, Buhari stated that many of his family members are in Niger Republic and they can’t be cut off.

“I have cousins, family members, etc., in Niger Republic. I shouldn’t just cut them off,” President Buhari said.

It will be recalled that the federal government of Nigeria has signed a $1.959 billion dollars Memorandum of Understanding (MoU) with Mota-Engil Group for the construction of Kano-Maradi Standard Gauge Railway lines.

According to a statement from the Ministry of Transportation, the project is expected to be completed within three years for use in both freight and passenger transport as it would be integrated with road transport.

The Federal Executive Council (FEC) back in September 2020, approved the sum of $1.96 billion to construct the 248-kilometre railway line from Kano to Maradi in Niger Republic.

Nigeria’s Minister of Transportation, Rotimi Amaechi disclosed this to State House Correspondents after this week’s FEC meeting which held at the Aso Rock Villa in Abuja.

According to him, the $1.96 billion construction cost includes 7.5% value added tax (VAT).

Boko Haram: Over 100,000 Flee To Niger Republic After Borno Attacks

Kaduna-Kano Rail Project: Buhari Borrows Only Less Than A N100b And You’re All Talking – Amaechi