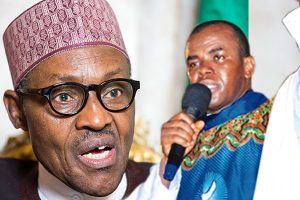 Catholic Priest and Spiritual Director of Adoration Ministry, Enugu, Fr Ejike Mbaka, has dismissed claims by the presidency that he asked President Muhammadu Buhari for contracts.

Recall that Mbaka called for President Buhari’s impeachment due to the current state of insecurity in Nigeria.

Reacting, the Special Assistant to the President on Media and Publicity, Garba Shehu, accused Mbaka of seeking for contracts from the president.

Shehu claimed that Mbaka resorted to attacks over the president’s refusal to grant his wish.

Reacting while speaking on Sunday at his church, the embattled cleric admitted that he took three contractors to tackle insecurity during Buhari’s first term not for himself.

Mbaka said, “In Nigeria, if you say the truth, they attack you. I’m not discouraged and I’ve been waiting for them to challenge everything I said. Challenge the truth, whether there is insecurity or not.

“Somebody talked about giving me contracts and I started laughing. I’m not here to defend any allegation.

“Buhari government is not giving me money or contract. It is a laughable and childish accusation. It is a shame to whoever is saying that and to the people he is representing.

“The three men Shehu talked about; the contract they asked for was for them not me. These three men had gadgets, facilities to handle insecurity during the first term of Buhari.

“They said they had a platform to end insecurity in a month. I don’t know these people. They just asked me to help them reach the government and I handed them over to the government.

“These are the three people they rejected their offer. I’m not begging them. Do they know how many people I feed. I don’t have their number.

“Which contract did they deny me of? Do they know how many widows and children I’m taking care of?”

Buhari: We Will Expose You – APC Threatens Father Mbaka