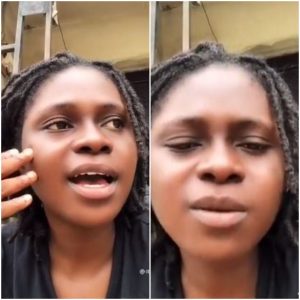 A Nigerian lady identified as itsabiyoung on Tiktok has taken to social media to describe how she discovered she’s a lesbian.

According to Itsabiyoung, she discovered she was a lesbian when she was quite young. She talked about how she shared a kiss with a girl, grew up, found herself loving girls, and just knew she would never love a man anymore.

See some reactions below:

@One grorge_10000 wrote; ‘Honestly eh, I am beginning to think some people are just born gay, not just because of what she said but I’ve talked to lots of them and most of them even hate that they are gay but they can’t help it’

@omoruyi_gracie wrote; ‘I did not listen to it. But there shouldn’t be any justification for doing abnormal things. God made Eve for Adam. He didn’t make Adam and Emeka or Eve and Angela.’

@juwon_debbie wrote; ‘This one is a clout chaser jare. No mind her. Wetin she know?’

Nigerian Lady Accepts Her Proposal In The Most Unusually Way |Video

Actress, Mary Remmy Opens Up About Her Struggles Being Married To iROKOtv Boss, Jason Njoku