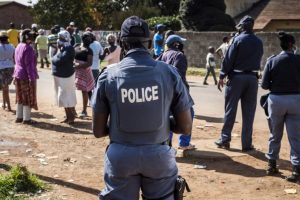 No fewer than 31 prisoners have reportedly escaped court verdict as truck conveying them to court was sabotaged by heavily armed men.

Naija News learnt that the incident happened in South Africa on Wednesday, April 28.

KwaZulu-Natal police spokesperson, Brigadier Jay Naicker, while confirming the incident to reporters a moment ago, revealed that the truck was seized at Pietermaritzburg.

Naicker disclosed further that the gunmen ambushed the truck around 8 am on Wednesday.

“Two police officers were transporting prisoners from the PMB New Prison to the Pietermaritzburg Magistrate’s Court when they were blocked off by a double cab bakkie with 5 heavily armed gunmen,” the police spokesperson noted.

“The suspects pointed firearms at the police officers and forced open the rear of the truck. 31 awaiting trial prisoners escaped out of the 45 that were in the truck. A manhunt is underway for the escapees,” Naicker added

Meanwhile, some unknown gunmen have reportedly assassinated a hotel owner identified as Kehinde Ibidunni and his wife, Elizabeth.

Supreme Court Justices In Nigeria Should Retire At 100 – Afe Babalola