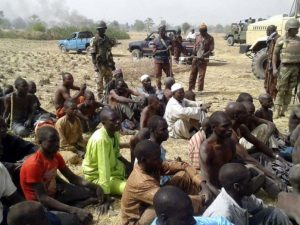 The Muhammadu Buhari-led federal government is set to drag about 400 alleged Boko Haram sponsors and financiers arrested in a nationwide operation to court.

It was gathered that criminal charges bordering on terrorism will be leveled against them as investigations continued into their nefarious activities.

The arrest of the Boko Haram financiers was sequel to the jailing of six Nigerians in the United Arab Emirates over allegations of terrorism financing.

The media aide to the Minister of Justice, Dr Umar Gwandu, told The Punch on Monday that the prosecution of the suspects “will commence as quickly as possible.”

Naija News recalls that dozens of persons were arrested by security agents in a nationwide crackdown on suspected financiers and collaborators of Boko Haram and other criminal groups.

It was gathered that the operation was led by a top intelligence officer, with an army general leading a task team comprising military personnel and staff from intelligence services.

A source told Daily Trust that an initial list of 957 suspects comprising bureau de change operators, gold miners and sellers, and other businessmen was acted upon.

In Kano, a major focus for the operation, traders at the foreign exchange open market in Wapa, Fagge Local Government, were picked up on March 9, 15th and 16th.

Four of the arrested BDC operators were related to two persons jailed in Dubai last year on similar charges.

Nigerian Politicians Own $400 Million Assets In London And Dubai