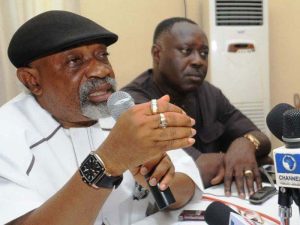 The Federal Government has fixed Friday for a meeting with the National Association of Resident Doctors (NARD) to address the ongoing strike embarked upon by the doctors.

Naija News reports that this was made known on Thursday to newsmen by the Ministry of Labour and Employment spokesman, Charles Akpan.

According to Akpan, the meeting which would hold at the ministry, will be chaired by the Minister for Labour and Employment, Dr Chris Ngige and attended by resident doctors and representatives of the Federal Government.

This newspaper reports that the doctors had begun an indefinite strike on April 1, owing to the federal government’s failure to pay their owed allowances and salaries.

The agreement between the FG and doctors broke down after the medical workers expressed lack of confidence in the Memorandum of Action signed with the government representatives.

The NARD had after its Executive Council meeting accused the government of insincerity and dismissed the MOA as a plot by the government to hoodwink the union.

But the Federal Government has not only substantially met the seven-point demand by NARD, “it has also demonstrated transparency in their implementation.’’

He said the House Officers have started receiving their payments in the federal government teaching hospitals and federal medical centres across the federation.

PDP Governors Meet In Benue Over State Of Nation, Party

Doctors Will Be Responsible For Any Death During Strike – Senate