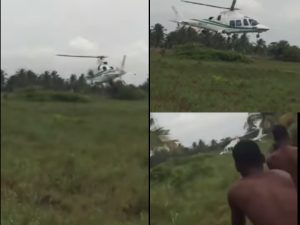 A Nigerian Navy chopper identified with the number (NNJI3) has been sighted in a forest in the South-West region.

Naija News understands that a video that has now gone viral on social media after it was posted on Thursday, has stirred mixed reactions as citizens expressed fear of seeing the chopper amid happenings in the country.

However, the exact location and time the event happened could not be ascertained at the time this report is given.

Watch the video below:

Naija News understands that the footage is causing a barrage of reactions and conspiracies on social media, with speculations as to whether the aircraft was on an official mission amid the security challenges in the country.

However, a source close to military chiefs explained that the chopper might have been on a trip legally assigned. The source said: “If the number starts with NN, it belongs to the Navy. My guess is there are pipelines in the area. The Navy conducts aerial surveillance too.

“If intelligence had indicated a situation that needed to be monitored, pilots would be dispatched immediately to carry out an assessment”, he explained.

This online news platform also understands that apart from full military operations, the Navy collaborates with the Nigerian Maritime Administration and Safety Agency (NIMASA). The Navy provides regular patrol and escorts support for NIMASA in line with the mandate of their partnership.

However, the Director of Naval Information, Commodore Suleman Dahun, when contacted on the sudden appearance of the chopper in the region did not take calls as at press time.

Why Military Helicopter Landed In The Forest – Navy