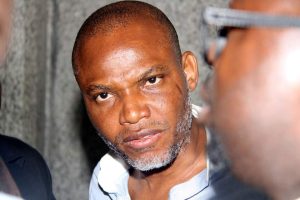 The Indigenous People of Biafra (IPOB) has denied an allegation that it moved arms and other weaponry into Imo from Lagos State to destabilize the state.

Naija News reports that the Department of State Service (DSS) in a letter to the Brigade Commander, 34 Artillery Brigade, Obinze, Owerri, Imo State,  stated that it received intelligence that the explosives were being moved in articulated trucks from Lagos to a hideout in Orlu, Imo State.

Reacting in an interview with The Punch, IPOB spokesperson, Emma Powerful, said there was no iota of truth in the “allegation coming from the Zoo agent” called DSS.

He added that anybody or institution was free to say whatever they liked about IPOB.

“What the DSS is saying is a huge lie. There is no iota of truth in what that Federal Government-sponsored Zoo and Caliphate agent is saying. Now, did you listen to my interview with Channels Televisions, two days ago?

“It’s just like the question the Channels Television guy asked. He asked me, ‘Who is sponsoring IPOB?’ I told him there was no single individual sponsoring IPOB. IPOB is a very gigantic movement.

“There is no truth in that allegation. Where are we moving the arms to and from where? I don’t think it is wise to continue to reply whatever this Zoo people accuse us of,” Powerful said.