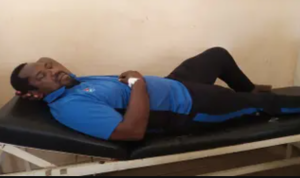 The Chairman of Nigeria Bar Association in Makurdi, Barrister Justin Gbagir, has accused security operatives in the Makurdi Zonal Office of the Economic and Financial Crimes Commission of allegedly beating him.

It was gathered that the NBA chairman is currently receiving treatment at the Benue State University Teaching Hospital (BSUTH).

Gbagir while speaking with newsmen at the hospital said trouble started when he went to the office of the anti-graft agency after receiving a telephone call that one of his female colleagues, Barrister Aver Shima, was being held by the EFCC.

“Yesterday, Tuesday 8/6/2021 at about 6:59 pm, Benue State Attorney General and Commissioner for Justice, Michael Gusa Esq, called to intimate me that our colleague who is also the Branch Treasurer was detained by the EFCC.

“Yesterday, Tuesday 8/6/2021 at about 6:59 pm, Benue State Attorney General and Commissioner for Justice, Michael Gusa Esq, called to intimate me that our colleague who is also the Branch Treasurer was detained by the EFCC.

“On further inquiry, I found that our colleague was detained on the allegation that she gave legal advice to the Chairman of Benue State Universal Basic Education Board (SUBEB) upon which the latter signed a document which is subject of an investigation by EFCC.

“Our said colleague is a law officer with Benue State Ministry of Justice and assigned to offer official legal services to SUBEB. She also Chairs one of the Rent Tribunal Panels.”

He disclosed that when he got to the commission office, he was hindered from entering the facility, while security operatives at the gate also threatened to gun him down.

Gbagir further stated that the development made him and few other colleagues, including the State Director of Public Prosecution, move across the road in front of Royal Choice Inn, a hotel directly opposite the EFCC office.

The NBA chairman said one of the operatives still accosted them and ordered them to leave the place.

He said the three government officials, including the state’s attorney-general, solicitor-general and a senior special assistant to the governor on legal matters, went into the EFCC office and later the solicitor general requested that he (Gbagir) should go in as well.

“I then asked whether I was brought in as an accused? When he did not answer me, I told the AG that with due respect, I cannot be made to be standing talking to the EFCC Head of office, and sought the leave of the AG to leave.

“As I made to leave, the personnel of EFCC numbering between seven and above pounced on me and started beating me. They broke my recommended reading eyeglasses in the process and pushed me out of the premises. Outside the premises, they threw out my footwear which I was dispossessed of in the course of the beating,” he added.

He lamented that the commission has failed in its primary responsibility, added that they do not want lawyers to accompany their clients to the commission’s office because of their unwholesome activities.

JUSUN, NBA Walk Out Of FG Meeting As Ngige Refuse To Show Up

Emotional scenes at The Masters as Lee Elder, the first black golfer to compete at Augusta, becomes honorary starter as NBA star Steph Curry is among those to thank him